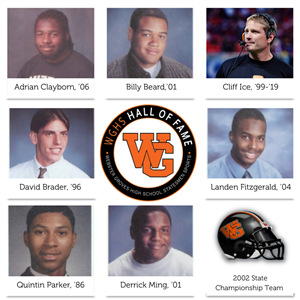 9/3/2022 - The next class of inductees to the Webster Groves High School Statesmen Sports Hall of Fame has been selected and will be honored at a banquet to be held Saturday, October 8, 2022, at Sheraton Westport Chalet in Westport.  The Statesmen Sports Hall of Fame will induct the 2002 WGHS State Championship Football Team during the 20th anniversary of their championship season.  In addition, Coach Cliff Ice and six football alumni will be inducted.

This year’s individual inductees will include:

Billy Beard, Class of 2001, earned football All-Metro and All-State honors at WGHS for his senior season in 2000. From 2002-2005 he played in at least 10 games per season and was a three year defensive starter at Southern Illinois University.  His career totals at SIU included 105 tackles, 21 tackles for loss, and 10 sacks.  In 2003, he led his team in sacks and tackles for loss and earned 2nd Team All-Conference honors.

David Brader, Class of 1996, played on WGHS’s 1996 State Championship Basketball team.  After high school he played collegiately at Missouri State and Lindenwood Universities.  He signed an NFL Contract with Jacksonville in 2005.  Since his playing days, David has coached over 30 All-State kickers and punters, 5 NCAA/NAIA All-Americans, and an NFL Pro Bowl Punter.  He has also coached Specialists at Lindenwood University and currently coaches specialists nationally.  He is also a scout for the XFL.

Adrian Clayborn, Class of 2006, was selected the 2005 Missouri Class 5 and STL Metro football Player of the Year before going on to play at the University of Iowa where he was selected as a First Team All-American and was the MVP of the Orange Bowl in 2010.  In 2011 he was selected in the first round of the NFL Draft Pick by Tampa Bay. Adrian played in the NFL for 10 years and won a Super Bowl Championship in 2019 with the New England Patriots.

Landen Fitzgerald, Class of 2004, was a member of the 2002 WGHS Football State Championship team as well as the 2003 team that finished as the state runner-up.  Landen was a two-time first team All-State wide receiver in 2002 and 2003.  He is also the all time leader in WG football history in receiving yards for a single season with 1,104 yards in 2003.

Derrick Ming, Class of 2001, earned football All-Metro and All-State honors at WGHS in 2000.  Derrick has the 5th highest single season rushing yards total in the history of WG football with 1,305 yards in the 2000 season and also has the 5th highest single season scoring total in WG football history with 120 points scored that same season. He went on to play football at the University of Missouri where he was selected as a team captain for his senior season in 2005. That was his best season at linebacker for Mizzou with 81 tackles and 5 tackles for loss. He earned Academic All Big XII Conference honors in 3 straight seasons from 2003-2005.

Quintin Parker, Class of 1986, earned football All-District honors For WGHS in 1985 before going on to play at the University of Illinois.  During the 1989 season, Quintin had a 100 yard return of a blocked extra point vs. Wisconsin and he earned All-Big 10 Conference Honorable Mention that same season. In 1990, he had a 45 yard touchdown return of blocked field goal vs. Ohio State and had 2 interceptions in his final game for the Illini.

In addition to these individuals and the 2002 state championship football team, the Hall of Fame committee will also recognize the following people for special awards:

The 2022 induction banquet will be held on Saturday, October 8th, at the Sheraton Westport Lakeside Chalet (191 Westport Plaza, 63146).  Tickets for the banquet cost $60 per person and are available for purchase by calling the WGHS Activities Office at 314-918-4176 or online at statesmensports.org/event-tickets.

The Webster Groves School District is committed to maintaining an educational and workplace environment that is free from discrimination, harassment, and retaliation in admission or access to, or treatment or employment in, its programs, services, activities and facilities.
Copyright © 2002-2022 Blackboard, Inc. All rights reserved.